Today we celebrate the life of Mac Cutler.  Mac was more than just a cat, he was my partner, friend and confidante.  He showed more love than anyone or any animal I have ever known – just like my Vanna dog who lived to be 18.  He was loved and cared for by all he met.

I have often believed that God sent Mac to me as my guardian angel and friend.  Mac adopted me.  When I first purchased the Augusta tennis club a very few weeks in an adorable orange tabby kitten came walking into my office, climbed up in my lap and went to sleep.  The next day the cat came in again and did the same thing.  He returned the next day but had a badly broken leg.  We took him to a member-veterinarian Dr. Gale and he got the break fixed (and got him fixed – sorry about that buddy).  From that day on he lived with us and we took care of him.

At first Mac lived only at the club.  When construction on the building commenced, he began his lifelong journey of going back and forth with me to work and home.  Mac loved to sit on the back window deck of my car for all those drives – and many motorists who saw him there waived and smiled.

At the tennis club, Mac became the club mascot and friend to everyone.  Every day he would go in with me and then head out to the club (and the neighborhood as it turns out).  Mac would have breakfast with me, then head to all the ladies in the neighborhood (club members) who would also feed him.  So spoiled little cat!  During the day he would mostly hang out by the courts and play tennis.  He would sit by the net and when the ball hit it he would run and pounce on it.  It became known at the club as a “Mac Let”.  He became so famous with this that the local newspaper did a feature on him.  During our professional tournaments (and virtually every day for that matter), he would sit on the front desk at the club and welcome everyone.  Mac got lots of love and gave it back in spades.

When I moved to Houston, Mac rode with me the whole way in the moving truck.  Mostly sleeping in my lap.  Mac has since had many more car rides including a visit to a cancer doctor in Los Angeles for help and treatment.  Mac became friends with anyone around him and became very close to me.  He helped me get through many crises, particularly recently, and was always there for me.  Mac always slept next to my side and provided lots of Mac kisses if I felt bad (or he needed love – or food).

I first noticed Mac had cancer in 2011 when a small tumor began to grow on his side.  Since he was still vigorous and strong, I took him to a specialty cancer doctor in Houston.  Mac had surgery to remove the tumor and chemotherapy sessions.  The doctors and nurses all praised him for being so sweet and loving.  I have a picture of Mac in chemo having a treat and loving the two nurses.  He had a strong recovery and I got to spend many more years with his love and care.

Sadly about a year ago the tumor recurred and returned.  Mac was simply too old by now to go through all the turmoil additional surgery and chemotherapy would have caused.  We worked with a client of mine that had a cancer treatment drug called Escozine made from scorpion venom.  I believe that treatment prolonged his life.  Mac continued until the very end to show love and always wanted to be around us.

Fortunately for all of us, particularly Mac, he did not seem to have pain from his cancer.  He was very distressed when a side effect from the disease caused Acites (fluid gathering in his abdomen), which eventually burst and lost fluid.  Mac had meticulously groomed himself his entire life and was distressed by the mess.

Late in the evening on Tuesday, December 1 we heard small cries from Mac.  I picked him up and held him.  I could tell he was scared and knew what was coming.  I comforted him while he passed in my arms.

Mac brought amazing love to my life and everyone around him.  He will be missed and will always be loved.  He is with God now who sent him to me in the first place and is waiting for us to get back together. 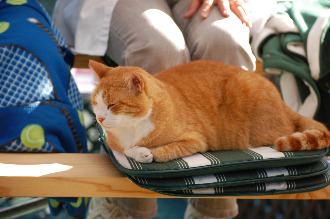